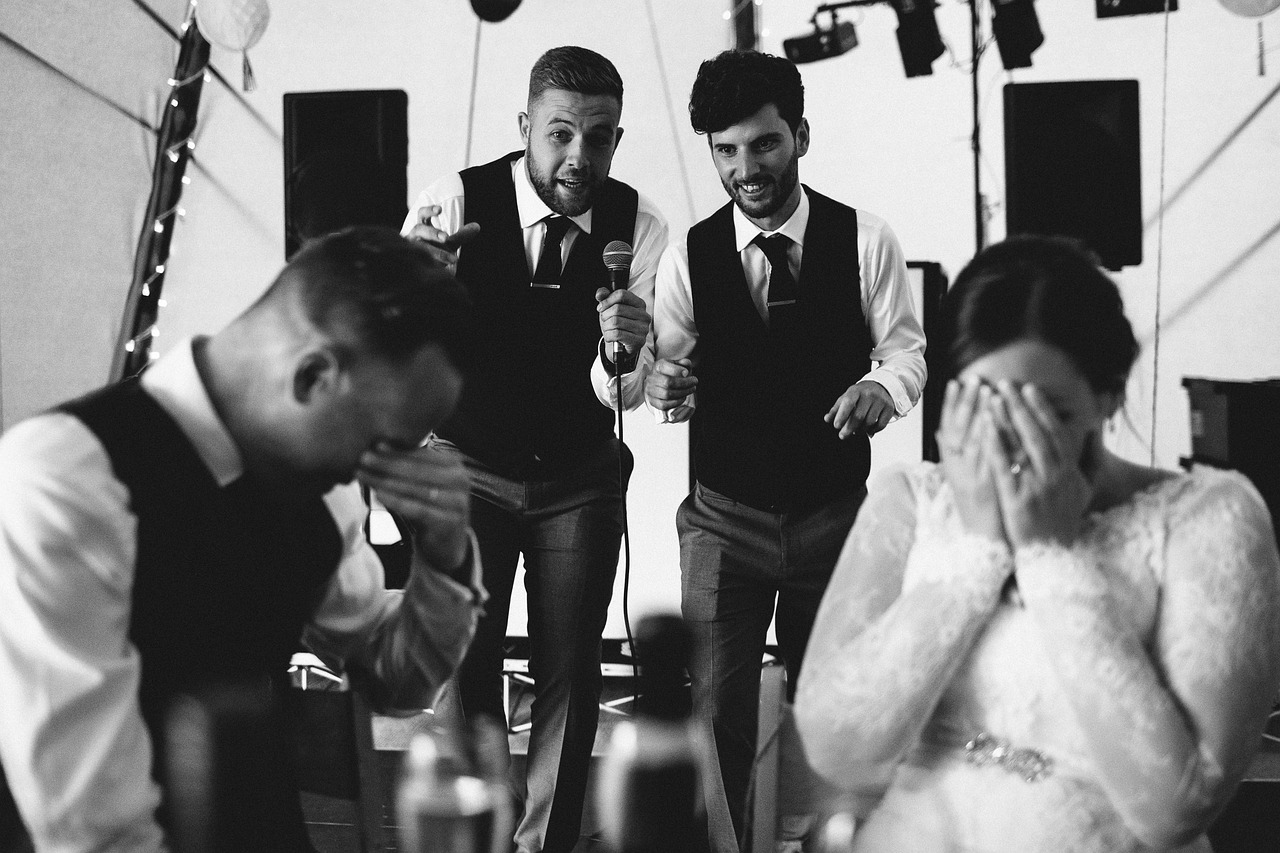 It’s a tradition that has been around for centuries from back in the time when the bride would be stolen from a neighbouring community and forced into marriage (nice, huh?).

The best man would be the one to rope in to help the groom steal the bride from her disapproving family – and he was often an awesome swordsman too.

Thankfully, these days, we like to think that the bride would be a more than willing participant, so don’t worry about brushing up on your sword skills just yet.

Despite kidnapping and swordsmanship no longer being on the agenda, still the tradition of the best man lives on as the guy closest to the groom.

He’s the one whose job it is to stand up and paint his friend in the best possible light to the bride’s family and other guests.

But, if you’ve been given the honoured role, you might be a little daunted by the thought of standing up in front of a crowd of people, most of which you might not know. As such you could be wondering what’s best to say in a best man’s speech to do your mate proud.

Well, having been to a few weddings in my time and seen some awesome, side splittingly funny, cringeworthy and downright calamitous speeches, here are a few things that you should and shouldn’t do.

The major tip is to avoid offending everyone there, but believe it or not it’s easily done. It might seem really funny to mention that time when recreational drugs were dabbled in, the groom spent a night in the cells, or had a close encounter with the neighbour’s cat, but believe me, it doesn’t go down too well with some of the rellies. And don’t ever mention exes. Ever. Really.

Here are a few more things to avoid in a best man speech according to Team Thomas:

And here are a few things you should try to do:

Funny speeches always go down well – if they’re funny. So, try it out on a few people first and make sure you’re not the only one laughing at your own jokes.

(And please. Pretty please avoid the ‘I took her home, my father didn’t like her’ one unless you really want to make everyone cringe…)

Check out some great examples which we found on YouTube to give you some inspiration.

And for further information on the wedding catering services that we provide and the odd best man tip here and there, feel free to get in touch with me for a chat!

Use the search box below to find what you're looking for.

Latest From The Blog

Check out our latest posts for inspiration or useful nuggets to help whilst planing your big day?

Jul 28
How To Find Outdoor Catering Services In Leicester

Jun 24
Weddings In Leicestershire – Our 2022 Guide

Check Availability For Your Date…

Enter your date and your contact details and check to see if your date is free.

This policy was last updated on Tuesday 22nd May 2018 and is compliant with all the latest rules and regulations in regards to Data protection within the UK.

We are committed to safeguarding the privacy of our website visitors; this policy sets out how we we gather, treat and work with your personal information.

Part A: Your Personal Data

In this section of the Privacy Policy we will cover the different types of data that we collect, how it is used, where it is stored, who it’s shared with and your rights to your data.

(3) Retention and deletion of data

(4) Your rights to your data

Most browsers allow you to refuse to accept cookies and to delete cookies. The methods for doing so vary from browser to browser, and from version to version. You can however obtain up-to-date information about blocking and deleting cookies via these links:

By blocking all cookies it will have a negative impact upon the usability of many websites. If you block cookies, you will not be able to use all the features on our website.

If you would like information on the data we currently store on yourself, this includes any requests for updating, deleting or supplying the data. Then please get in touch using the below details, please note any requests for data interaction will carry a 10 GBP administrative charge.